Backyard Brisket – The King of BBQ

Backyard Brisket – The King of BBQ

My first recipe entry on the new Backyard SmokeMaster BBQ website is for beef brisket which is the undisputed king of BBQ. I’m saying that brisket is the king because it’s the best BBQ recipe. It is the king because when it comes to big hunks of meat, a well smoked brisket is the most challenging, tiring as well as rewarding cut that you can tackle.

If you’re brand new to BBQ, don’t start with brisket. Brisket can be unforgiving. For starters, it is not inexpensive. The price for well marbled prime brisket finally dropped to $3.49 per pound at my local Sam’s Club. That brings the cost for an average 12 – 14 pound brisket to around $45. I stopped buying briskets when the price was up to $4.99 per pound.

At these prices, you don’t want to mess up a brisket by trimming it improperly, smoking it at a temperature that is too high, not letting it rest long enough, etc. Despite all of these potential pitfalls, a well smoked brisket will give you a great sense of accomplishment and your loved ones will love you for the great tasting food. Take the extra step and make burnt ends out of the point and you will a certified BBQ hero!

The first step after bringing the brisket home is deciding when you’re going to smoke it. Smoked brisket is a long cook and you should have a plan. I always budget at least 12 hours (give a take a few hours either way) for the brisket to be on the smoker. This does not include the time it takes to get my Lone Star Grillz 20×42″ up and running or the 3 – 4 hours resting time after the brisket comes off of the smoker. 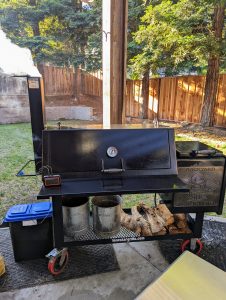 I highly recommend trimming the brisket the day or night before you plan to smoke it. It is a good idea to put a thawed brisket into the freezer for a couple of hours before you start trimming. This will make it much easier to trim. Brisket has large pockets of fat that need to be removed and the fat becomes more spongy and difficult to cut when it is at room temperature.

Start by trimming away any silver skin and small pockets of fat from the meat side. Take a look at the edges of the brisket and trim away anything left over from the butcher’s cut that doesn’t look appealing. I try to square off the sides by trimming away anything that’s kind of hanging off of the edges. Most likely it won’t cook at the same speed as the rest of the meat so it doesn’t do much good to keep it. 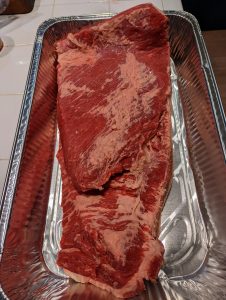 Flip the brisket over and cut down the fat cap. Try to keep no more than 1/4-inch of fat. Excess fat will not render, nor will it be a pleasant chew. 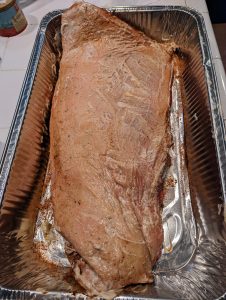 I’m aiming to keep my offset smoker between 225 and 250 degrees but I’m OK if the temp climbs to 275 degrees. I like to use a combination of oak, pecan and cherry wood or I’ll smoke with only oak wood. 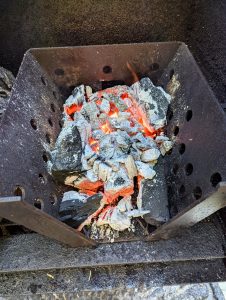 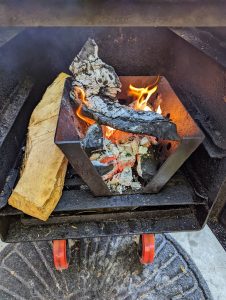 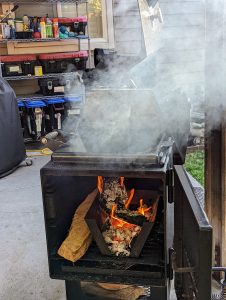 While the smoker is coming up to temperature, slather the brisket with a binder. I like to use mayonnaise but you can use mustard, olive oil or Worcestershire sauce if you prefer. Currently, my favorite brisket rub is John Henry’s Texas Brisket Rub. 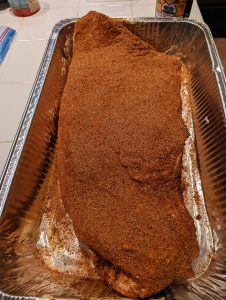 Or you can make your own Texas style rub. Aaron Franklin uses equal parts kosher salt and course black pepper. Make around 1/2 a cup for a 12 – 14 pound brisket.

In LSG offset, the highest temperature is on the upper rack on the left side (the side closest to the smoke stack). The point of the brisket (the pointy end) is thicker than the flat end so I’m also going to place the brisket inside of the smoker with the point facing the left so that it receives the most heat. 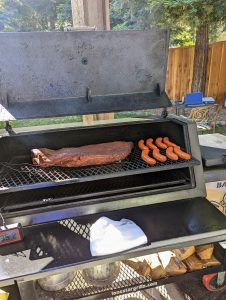 Let the smoker work its magic. Keep the brisket inside of the smoker and resist the urge to peak for around 6 hours. Opening and closing the chamber door / lid will cause temperature fluctuations inside of your smoker that may result in unwanted temperature drops or spikes as more air gets inside. This is the time period when the brisket will take on smoke flavor. Your biggest job is to monitor the temperature of your smoker, keeping it between 225 – 275 degrees. I like to use my Fireboard Drive to monitor the temperatures inside of the cooking chamber.

At this stage, the brisket has taken on all of the smoke flavor that it can. You are also probably close to reaching the “stall”.  You can choose to either push through the stall and continue smoking or you can apply a “crutch” to help speed up the process.

If you push through the stall, know that the internal temperature of the brisket may stop increasing (it might even drop) after several hours.

If you decide to use a crutch, you can choose between tightly wrapping the brisket in aluminum foil or inside pink butcher paper. Our goal is to reach a temperature of at least 203 degrees.

Using aluminum foil will likely get us there fastest. The downside is that the brisket is steaming inside of the foil and some of that tasty bark that you worked hard to develop may dissipate.

Butcher paper will do a better job of preserving the bark. The downside is that it won’t get the brisket to 203 degrees as quickly as aluminum foil.

I prefer to use butcher paper. I cut a piece long enough to wrap the brisket twice over. Before I put the brisket on the paper, I smear beef tallow on the paper. The use of tallow is optional. I can’t prove scientifically that it benefits the brisket but I know that my brisket always looks extremely moist coming out of butcher paper with tallow so I’m going to keep using it. 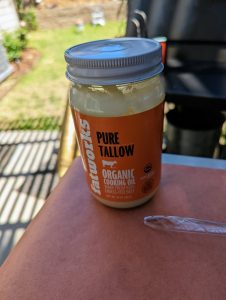 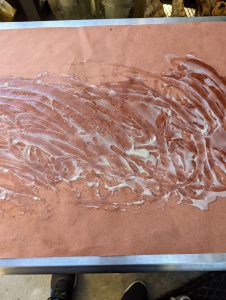 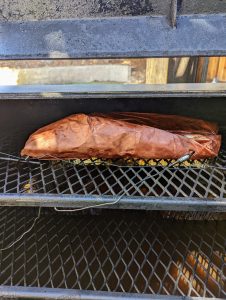 After I verified that my brisket reached 203 degrees with my instant read thermometer (it should slide into the brisket with no resistance, like butter), I let it rest, still wrapped, inside of my Cambro for at least 3 – 4 hours. This step is very important! Your brisket has been on the smoker for at least 10 hours, maybe more. It needs to “settle” before you start to slice into it. If you don’t have a Cambro, place it inside of a dry water cooler or inside of your oven (don’t turn the oven on).

After the brisket has rested, unwrap it and slice it making sure to cut against the grain. If you followed these steps, you should have a tasty brisket with a great bark and maybe even a smoke ring! 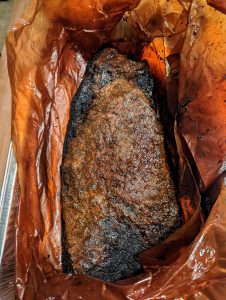 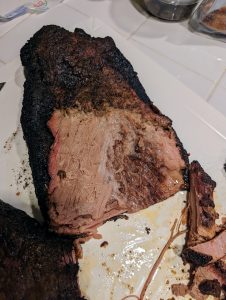 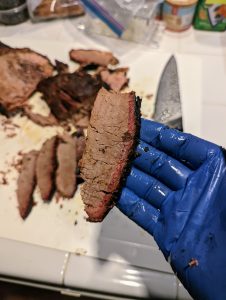 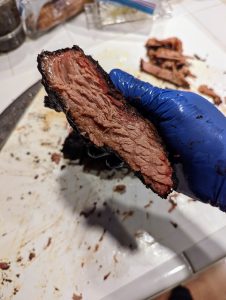 Don’t worry if there is no smoke ring, the flavor is the true test of whether the brisket is good. Enjoy your great brisket and soak in the accolades from a long but rewarding cook!

Please leave comments if you would like to see a recipe for brisket burnt ends.

Listen To The Backyard SmokeMaster Podcast

The podcast is available on most popular podcast players like Apple, Spotify, Google or you can listen right here!...

Unleash The Pitmaster Inside Of You Today!

Backyard SmokeMaster BBQ supports the thriving community of aspiring backyard barbecue cooks who want to learn how to (or get better at) barbecue through videos, newsletters and podcasts. Learn how to select the best smoker for your needs and home, obtain easy to follow barbecue recipes and get advice when you need it!

My name is Kenyatta Robinson and my mission is to help you overcome doubts about your ability to cook barbecue and transform you into a successful backyard pitmaster who consistently makes great tasting food with your smoker. Get your questions about barbecue answered and let me help you grow your confidence on the pit. Don't wait any longer, sign up for my newsletter and let's get started on your new barbecue journey today!

TESTIMONIALS
"Thank You So Much for your great lessons & insight on all things BBQ. Truly A Great Teacher I really appreciate it",
Mick Cotton Bar-B-Q

Please log in again. The login page will open in a new tab. After logging in you can close it and return to this page.